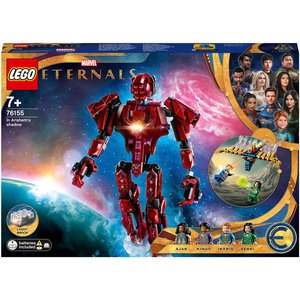 Combine all the fun elements of the Marvel Studios’ The Eternals movie in one awesome LEGO® playset. In Arishem’s Shadow (76155) brings 4 Eternals, a Deviant and a Celestial together in a superhero confrontation kids will love. Recreate Marvel movie action Kids join forces with 4 Eternals to defeat a Deviant bat. The Eternals have cool powers: Ajak is the only one able to communicate with the powerful extra-terrestrial beings, the Celestials; Sersi transforms matter into whatever she desires; Ikaris has superhuman strength; and Kingo can blast terrestrial energy. The set also includes a posable Celestial figure that can hold an Eternal minifigure in its hand. And, if you’re buying for a minifigure fan, this awesome LEGO playset is the only one to feature the Ajak and Kingo minifigures! Marvel Studios’ The Eternals playsets LEGO Marvel The Eternals building toys are unique playsets with cool characters that inspire kids’ imaginative play and take them to an endless universe of role-play fun. Features: This LEGO® Marvel The Eternals In Arishem’s Shadow (76155) playset puts Marvel movie action into the hands of young superheroes as they help 4 of the Eternals take on an evil Deviant. Inspire imaginative play with 4 Eternals superhero minifigures – Ikaris, Sersi and exclusive Ajak and Kingo – a Deviant figure, a posable Celestial with a light-up chest, 2 daggers, 1 sword, 2 mini shooters and a blade. Kids must use all their superhero skills when a Deviant launches an attack on 4 leading Eternals. With an all-powerful Celestial big enough to hold an Eternal in its hand looking on – anything can happen! Looking for a cool birthday or holiday gift for a kid aged 7 and up? With its collectible minifigures, large posable creatures and endless action – any young superhero will love this LEGO® Marvel The Eternals playset. With the Celestial figure standing over 11” (30cm) tall, LEGO® Marvel The Eternals In Arishem’s Shadow gives kids superhero action that also looks awesome on display in any youngster’s bedroom. This collectible construction toy doesn’t need batteries – apart from the included batteries for the light brick. So, young superheroes can enjoy hands-on fun and imaginative role play that never stops! Simple, clear instructions help kids enjoy fun building and imaginative play with their The Eternals superhero playset without delay. Kids can combine this set with others in the LEGO® Marvel The Eternals range to expand the imaginative play possibilities even further. LEGO® building sets meet the highest industry standards, which means they are consistent, compatible and connect and pull apart perfectly every time – it’s been that way since 1958. LEGO® bricks and pieces are dropped, heated, crushed, twisted and analysed to make sure your child’s building set meets the highest safety and quality standards in the world. Age: 7+ Number of Pieces: 493