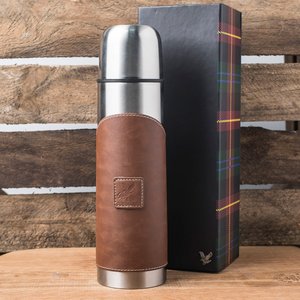 Are you tired of your man complaining about the low quality caffeine fixes where they work? There's nothing worse than machine coffee that looks like soup, and tea that looks, and tastes, like coffee. If you've been racking your brains for a good gift for an upcoming birthday or occasion, but don't want to get him something that's too useful and potentially a bit boring, then we have the answer to your prayers. This flask, from Lyle & Scott, blends on-trend fashion with must-have practicality. The stainless steel and brown leather contrast adds a high-end look. With cream stitching, it will be sure to make him feel like an A-list celebrity. Boasting the famous logo, your fashion-conscious beau will be the talk of the office. Presented in a beautiful box, the lining is that of a map of the area in which the company is from. About Lyle & Scott: A knitwear company founded in 1874 by William Lyle and Walter Scott, in a small town in the Scottish borders, the aim was to produce quality underwear to Victorian Britain. After success in doing so they progressed further into other fashion realms. After becoming a respected name within the industry almost overnight, they began to land partnerships and collaborations with a number of high-end fashion designers, Christian Dior and Chanel to name a few. Their golf-wear range launched in the 1960s, coinciding with the emergence of the, now iconic, golden eagle motif. Representing reliability and quality, as well as acting as an homage to a golfing term, the relationship with the sport further exposed their name across the globe. The 80s brought the bright colours of the golf-wear range to their main apparel, creating a more modern image for the brand. And in 2003 it began to attract a new generation of young stars, proving particularly popular within the indie pop scene.  Material: Stainless Steel & LeatherColour: BrownCapacity: 450mlCare instructions: Wipe clean with damp cloth

Best Price: £32.99 from Getting Personal