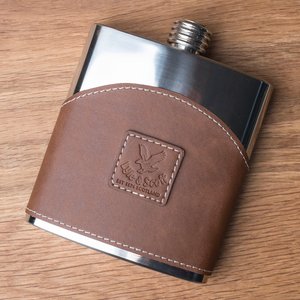 Every gentleman needs his trusted hipflask. Even if he never intends to use it, it's the ultimate chic accessory that slips oh-so-elegantly into their inner suit pocket, ready and waiting for when he needs that pick-me-up. The stainless steel and brown leather contrast adds a high-end look. With cream stitching, it will be sure to make him feel like an A-list celebrity. Boasting the famous logo, he won't be out of place on the golf course with this sophisticated accessory. Presented in a beautiful box, the lining is that of a map of the area in which the company is from. About Lyle & Scott: A knitwear company founded in 1874 by William Lyle and Walter Scott, in a small town in the Scottish borders, the aim was to produce quality underwear to Victorian Britain. After success in doing so they progressed further into other fashion realms. After becoming a respected name within the industry almost overnight, they began to land partnerships and collaborations with a number of high-end fashion designers, Christian Dior and Chanel to name a few. Their golf-wear range launched in the 1960s, coinciding with the emergence of the, now iconic, golden eagle motif. Representing reliability and quality, as well as acting as an homage to a golfing term, the relationship with the sport further exposed their name across the globe. The 80s brought the bright colours of the golf-wear range to their main apparel, creating a more modern image for the brand. And in 2003 it began to attract a new generation of young stars, proving particularly popular within the indie pop scene.  Material: Stainless Steel & LeatherColour: BrownCare instructions: Wipe clean with damp cloth

Best Price: £24.99 from Getting Personal